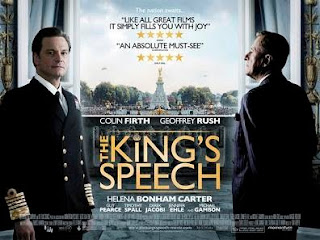 I’m probably the last person on the planet to see The King’s Speech, but I finally got round to it this week, and - like everyone else - I loved it.

This is a story in which nobody gets shot and nobody has to make any life or death decisions, but the ending was edge-of-the-seat stuff all the same. The live BBC broadcast to the nation on the outbreak of WW2 - would it be a triumph, or would it be a disaster?

The new king, George VI, otherwise known as Bertie, never wanted the throne. A quiet, shy, devoted family man with a terrible stammer, he was happy to stay out of the limelight and would have probably spent his whole life in obscurity, had not his brother decided to abdicate, leaving Bertie to take over the family firm.

Bertie had a terrible stammer, which was a huge handicap for a king emperor whose country was being inexorably dragged into another world war, and needed an inspirational leader. So he had to tackle his stammer, face down his fears and get on with doing those live BBC broadcasts, making speeches to the nation, seeing his people and being seen. He was determined to do it, and did so with the help of an equally determined and motivated speech therapist, who gave the king the confidence he so badly needed.

Let’s have Oscars for both Colin Firth and Geoffrey Rush, who showed us all how to feel the fear, but to get out there and do it anyway.

Posted by Margaret James at 7:46 PM No comments:

I've been looking at all the new catalogues this week, trying to decide what the future holds for novelists, and I see that vampires are still biting everything and everyone in sight. Paranormal and time travel seem popular, too - or publishers hope they will be!

What else? Jane Austen tribute fiction is much in evidence, as is cheerful chick lit and - going to the other extreme - fiction about painful lives.

It must be absolutely horrible to be a victim of the Queensland flooding. What can we do to help? We all know how comforting and pleasant it can be to curl up with a good book, and to be transported to a different place and time for a while. So why not send a book of your choice to Queensland, and support the Romance Writers of Australia's appeal? Your book doesn't have to be a novel, of course, let alone a romantic novel. You choose the book(s).

If you send your book via The Book Depository website, you won't even have to pay postage - it's free to Australia. See http://www.bookdepository.co.uk

Posted by Margaret James at 9:39 PM No comments: 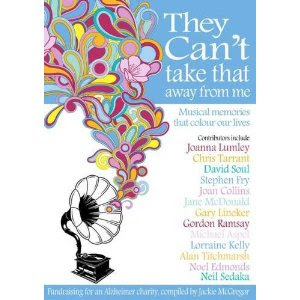 We all dread becoming old and helpless. Or I do, anyway. So I'm very happy to help promote a new collection of musical memories entitled They Can't Take That Away From Me, which is being produced and sold in aid of Alzheimer charities. The editor, Jackie McGregor, is still collecting musical memories from writers and other celebrities, but the production schedule is hotting up now, because the book will be published this summer.

Why musical memories? Well, because love and appreciation of music tend to remain with us well into old age, and most dementia patients happily respond to their favourite tunes, even when the rest of their sensory perceptions are seriously impaired.

Posted by Margaret James at 1:17 PM No comments:

If you have five minutes to spare, you could nominate your favourite and least favourite book covers on this link - http://www.covercafe.com/nomination.shtml. Some of the worst ones are hilarious...
Posted by Margaret James at 5:04 PM No comments:

Busy weekend - I did a creative writing workshop in Exeter on Saturday, and today I did an interview with fellow novelist Steve Emmett, who invited me to be a guest on his blog.

The creative writing workshop went very well. The eight people who took part were all keen to develop their novels-in-progress, I was impressed by their commitment and professionalism, and I think we all learned a lot yesterday! I'm grateful to Cathie Hartigan for setting it up, and I hope we'll be able to do more workshops together. You can learn more about Cathie's other workshops at www.creativewritingmatters.co.uk.

I had a great time chatting to Steve, and you can read his interview with me on his website at http://chukkienator.blogspot.com.
Posted by Margaret James at 6:12 PM No comments:

January Book of the Month

I've been a bit slow about getting to grips with 2011 - can't believe it's 6th January already! Why is my life flashing past so quickly? What can I do to slow it down? I know, read a really boring book. Or maybe not - I'd much rather read a great one!

This brings me on to my book of the month for January, David Nicholls's brilliant, wonderful, superlative novel One Day, which certainly doesn't need endorsement from me (it's sold in zillions and is still selling in zillions), but is going to get my endorsement anyway.

It tells the story of Em and Dex, two students who meet just before they set off on their adventures in the cruel, hard world, and it catches up with them on the same day each year. It's one of those novels in which the writing is so real and so believable that Em and Dex become the reader's friends. I haven't cared about any fictional characters quite so much since I read To Kill A Mockingbird about a hundred years ago.

David Nicholls shows the rest of us how to do it.
Posted by Margaret James at 12:42 PM 2 comments: