It's November and that means just one thing (okay, one thing of many, let's keep it real) to members of the RNA - it's party time.

The RNA is famous for its parties and this year's was a great one. These parties share some elements of a traditional school reunion - we catch up with people we might not have seen for years, we share successes, we commiserate with those who haven't had such a great year, we chatter and gossip and network, and we generally have a good time. I always come away from an RNA party feeling energised and optimistic.

As a member of the successful Devon-based team CreativeWritingMatters there was a lot of networking to do. CreativeWritingMatters currently runs competitions for both novelists and writers of short stories, we organise workshops and we write books. Yes, following the success of The Creative Writing Student's Handbook, we're branching out into publishing and have more titles in the pipeline. So check out our website from time to time and see what is new?

We're delighted and honoured to have the bestselling novelist Trisha Ashley involved in our short story competition  - The Exeter Story Prize - next year. All the details of the competition are on our website at www.creativewritingmatters.co.uk and we can promise the inaugural awards ceremony in October 2015 will be quite a party, with plenty of events to interest writers in all genres.

But long before October we'll be hosting an event during which the second Exeter Novel Prize will be awarded. This will be in the spring and will also be a party. We hope writers from Devon and beyond will join us and enjoy the day. Last year's event was a big success so we're determined to repeat it!

Here's a photograph taken by Liz Harris of the CreativeWritingMatters team with the literary agent Broo Doherty, who will be judging the Exeter Novel Prize. Left to right, Margaret, Broo, Sophie and Cathie. We'll look forward to meeting you in Devon in the spring! 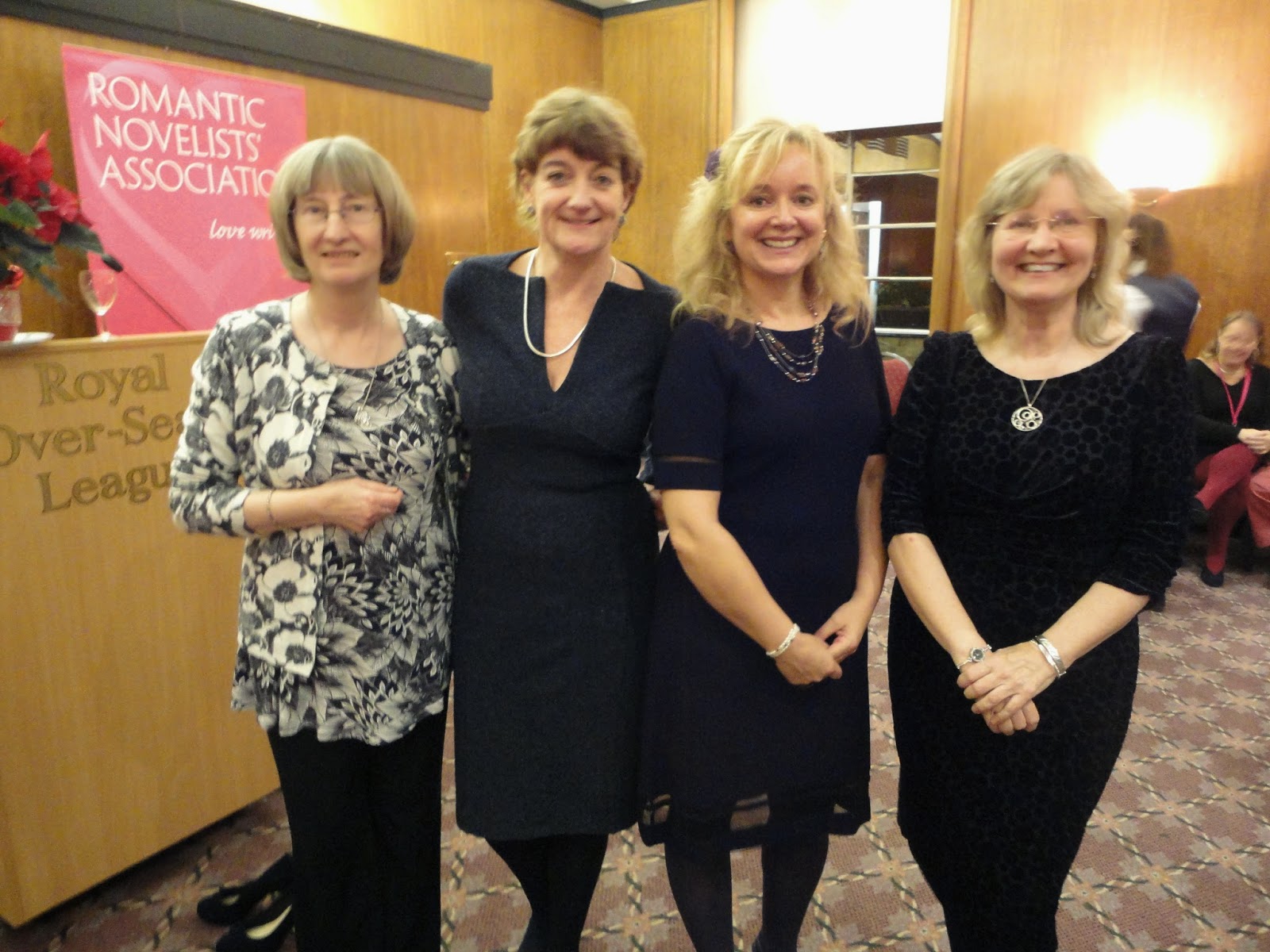 But in the meantime - happy reading and writing!

Posted by Margaret James at 12:11 PM No comments:

Today, it's from Russia and the West Country with love...

My special guest on this sunny autumn afternoon is Elizabeth Ducie, whose first novel Gorgito’s Ice Rink was published in October 2014. 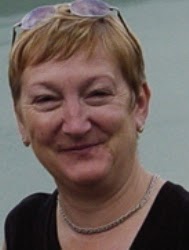 Welcome, – sit down and have a coffee and a ginger biscuit!

The first thing I noticed about Gorgito’s Ice Rink was its lovely cover. I know you had some input there, so could you tell me how you came up with the concept for the cover? What does it say about the book?

Yes, it is beautiful, isn’t it? In many ways, I see Gorgito as ’s answer to Zorba the Greek and the original concept was to have a sketch of the man himself, with the skater and the buildings in the background. Unfortunately, while the artist captured the character well, it looked more like a children’s book than an adult’s novel. So I turned to Berni Stevens for help. I searched her website for examples of a suitable style and came up with the silhouette format. We started out with Gorgito on there as well, but decided having him in the title was sufficient and ended up with the final version, with which I am delighted. 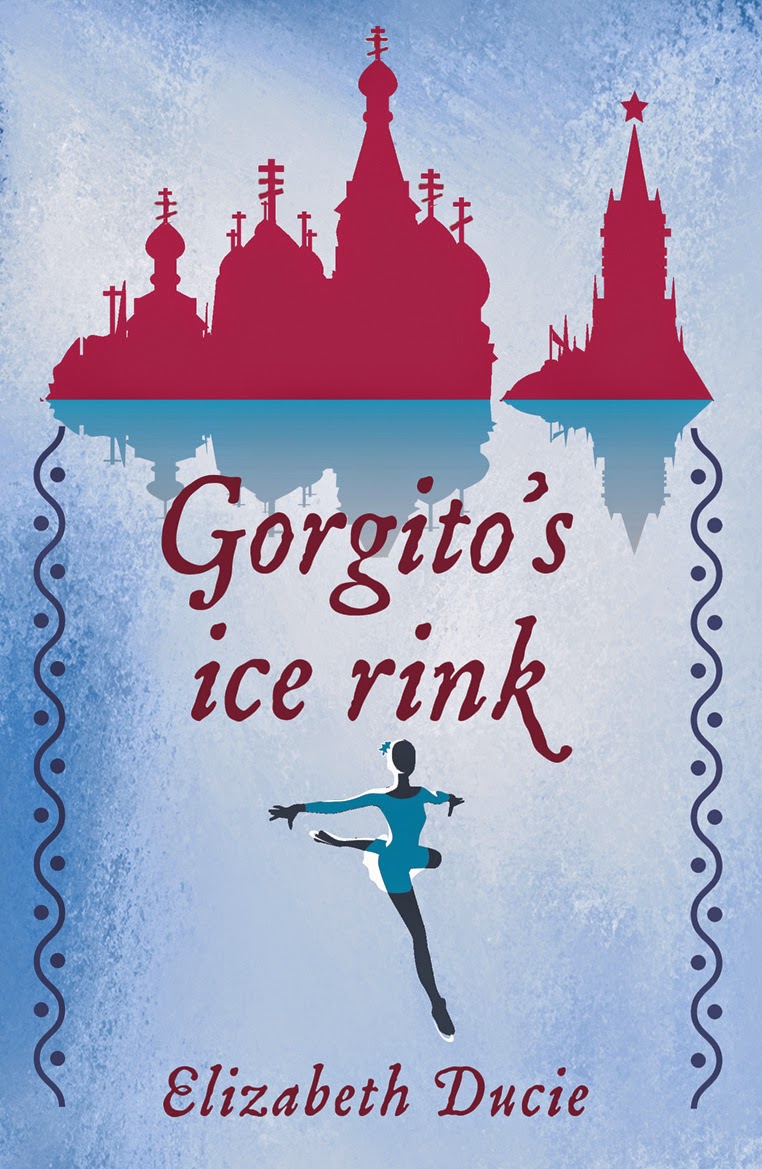 When you started writing Gorgito’s Ice Rink, did you have a master plan or did you start the story and see where it would take you?

Gosh, it’s seven years since I started, so it’s hard to remember. I certainly didn’t have a master plan right from the beginning. I think I wrote it in three main chunks and then integrated them. By 2010, I had the first five chapters written and knew what the end would be. So I had A and Z, but no real idea of how I would get from one to the other. At (where I studied for an MA in Creative Writing), I learned to write film treatments (a scene by scene outline) and this helped me map out the main storyline. However, I came up with Gorgito’s back story quite late in the day; and the third strand, Emma’s story, right at the end.

You’ve travelled and worked all around the world. I can tell from reading your book that you have a special affection for and its people. What is so compelling about and the Russians?

I worked in from 1993 onwards, so just after the fall of the . So I had the privilege of watching that huge, fascinating country move from one major political and economic system to a different one. It was interesting to watch changes occur, not at the macro, but at the micro level; changes in facilities in hotels, levels of service in shops and so on. The Russian public face is quite a stern one; someone once told me you didn’t smile in public as you never knew who you were standing next to. However the private face is friendly, generous and fun-loving. I’ve had some wonderful times and made some great friends in the past 20 years.

You’re involved in organising an annual literary festival in your home . Please could you tell us something about it?

In 2011, Chudleigh Writers’ Circle ran the first Chudleigh Literary Festival. It was just one day, with writers’ workshops in the morning, guest speakers, including the wonderful Ann Widdecombe, and an open mic session in the afternoon. In 2014, our fourth annual festival encompassed a one-day workshop for history writing; a day of general workshops for writers; a ‘meet the authors’ supper; a choir performing Charles Causley’s poems; guest speaker Tony Hawkes; a day of poetry workshops for the children in the Primary School; and an associated poetry competition. We are nowhere near as big as Dartington or Budleigh Salterton - and I don’t think we would want to be, as our focus remains a festival for Chudleigh, rather than a festival in Chudleigh - but we’re still growing and have some exciting plans for 2015.

How do you organise a typical writing day? Or isn’t there such a thing for you?

I try to write every day, although it doesn’t always work out that way - and I write nothing at all in July and December. I am very much a lark, rather than an owl, so if I’ve got anything I must finish, I will attack that first. I generally write in the mornings and leave the afternoons for marketing and non-writerly activities. I’ve also started writing more by hand, when I’m away from home - and find that sometimes flows better than words on the screen. I am lucky enough to have an office across the garden which has been converted for me to write in - but I’m just as likely to be found writing at the dining table, especially if it’s raining.

What are you writing now?

I’m using November and NaNoWriMo to write the first draft of my second novel. I’ve learned a lot in the past seven years and I hope that this one will be out by this time next year, rather than in 2021. This one’s also based on my travels and centres on counterfeit drugs in .

How would you like your fiction-writing career to develop?

I hope to publish a growing portfolio of works, both novels and collections of short stories. But my first writing experience was in non-fiction and I expect that to continue in parallel, especially my books of business skills for writers.

Definitely in, but surrounded by friends, all eating drinking, laughing and chatting together. (Mind you, if it’s at a friend’s house, so we don’t have to  wash-up afterwards, that’s even better. Not sure if that qualifies as in or out).

Apart from the aforesaid evenings with friends, I love discovering new restaurants. Michael and I rarely take overseas holidays these days (we did too  much travelling on business over the years and anyway, when you are doing a  job you love in a part of the world you love, what is there to go on holiday  from?) but we enjoy searching out fine dining establishments and treating ourselves to the odd overnight stay. When we were in , and just a short distance from L, we were spoiled for choice, but now we’ve moved to the south west, we are gradually eating our way around the country house hotels of the region.
I want to say my husband, Michael, but he might object to being classed as a possession. So I think it would have to be my data stick which contains all my writing and travels everywhere with me.

Can I be greedy and have two please? Firstly Meditation from Thais by Massenet; I saw this performed by two beautiful dancers in the theatre in   years ago and have never forgotten the sight. And secondly Tchaikovsky’s 1812 Overture, which I’ve seen performed many times in UK,  but most memorably in St Petersburg at 2pm in the afternoon, during their City Day celebrations, with red white and blue fireworks against a deep blue sky in brilliant sunshine.

My youngest sister frequently says “When I’m Emperor of the World I will...”    and always ends the sentence with an eminently sensible solution to one of today’s problems. So I would hand over Executive Power to her and go back to writing. (But I would suggest that she made voting in elections compulsory.  Women fought so hard to get the vote, we shouldn’t waste it. And I would ban party politics, so everyone in public office had to go with the the wishes of  their constituents, rather than the views of the whips.)

Thank you, Elizabeth, it’s been great to talk to you!

You can buy ’s novel here –