It's the RNA Summer Party next month. I'm looking forward to finding out who will win both the Joan Hessayon Award for first time novelists and the Major Award for Romantic Novel of the Year. Several of my friends are up for both awards, so it's a nail biting time!

But look at that word summer. It's 23 April - happy St George's Day and happy birthday, Shakespeare - but where is the sunshine?  It's pouring with rain and I have the central heating going full blast. But hey, this is England, and we're used to it. The sun will come out tomorrow - perhaps.
Posted by Margaret James at 10:06 AM No comments: 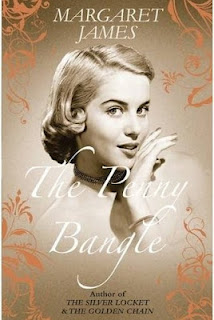 If anyone fancies winning a big Victorian penny made of chocolate, all you have to do is leave a comment this link:

This month, I'm touring the world wide web promoting my novel The Penny Bangle, and am kicking off today with an interview on Deborah Carr's blog. Thank you for interviewing Robert, Deborah - he enjoyed talking to you!

There will be more penny-winning opportunities next week!
Posted by Margaret James at 9:52 AM No comments:

The winner of the first Choc Lit short story competition is Lucy Mouland, who entered a wonderful story which did just about everything a short story should do. Lucy introduced the reader to a likeable and attractive character who was in a difficult situation, and the story showed us how he dealt with this situation in an unexpected but appropriate way. There were several very small but telling touches which made me feel I knew the central character very well indeed.
Although there were some surprises in the story, the conclusion was logical and left the reader feeling satisfied.
A good short story should show a central character moving on in some clearly definable way, and this one did exactly that. I would have liked to know this central character's whole story. Maybe Lucy will write a novel about him one day?
Runner-up Laura E James (no relation!) also wrote an original and moving story, which delivered a satisfying ending.
Well done, Lucy and Laura!
See http://blog.choc-lit.co.uk/?p=2601 to read the winning story.
Posted by Margaret James at 12:58 PM No comments:

Today, I'm chatting to Cornish author Rosen Trevithick whose books are hugely successful in the UK's Amazon Kindle charts. Rosen is a versatile writer and her new collection of short stories, Seesaw, offers readers something for all moods. If you're happy, sad, emotional, in need of cheering up - you've got it! Seesaw is my April Book of the Month.

Rosen, who or what inspired you to start writing fiction?

Learning to read inspired me to start writing fiction! As soon as I learnt to say "cat", I was waiting for my next word so that I could try out different combinations.

It helped that there are some wonderful, inspiring books for children such as those by Roald Dahl. I wrote stories for my teachers, my friends and later, a little sister. There were also a number of plays which were usually performed through a hatch in the kitchen, using cuddly toys and my long-suffering brother.

When did you decide you wanted to become a writer?

I don't remember ever making a conscious decision to become a writer.

I decided to become a self-publishing novelist in 2010 when I found out about the Kindle Direct Publishing programme, and learnt how easily I could share my work.

You’re a very versatile author, writing in several genres and styles. Do you have a favourite genre, or do you feel it’s more rewarding to experiment?

I like to keep things varied. Comedy is my favourite genre and I absolutely loved writing London, the Doggy and Me, but experimenting with other genres has helped to keep things fresh and interesting. Sometimes a story just has to be told, and it doesn't matter whether if fits your genre, brand or target audience, you just feel you have to do it; my short On the Rocks is a prime example.

Please could you tell us something about the stories in Seesaw?

Some are silly and humorous, others handle very serious subjects, usually with a psychological element. Readers have reported both laughing out loud and bursting into tears, which I'm told, is a good thing!

On the one hand, there's Lipstick and Knickers, a comedy about a man who finds an unfamiliar pair of knickers on his bedroom floor and investigates their origin, and London, the Doggy and Me, a farce about a woman charged with looking after the body of a gigantic dead dog. At the other extreme, there are stories tackling issues like kidnap, suicide and mental health.

They're all tales that I originally wrote as standalone pieces to introduce people to my work. However, they really took off and became popular in their own right. Many people asked if there were paper copies, so I put them together in a paperback volume. At first glance, the content of the stories may appear unlinked, but the preface explains all.

What are you working on now?

My next novel! It's a black comedy about the world of indie publishing. I'm going to have to be careful to get across the humour without alienating other indies, because there are many very talented self-published writers out there, and I don't want to do them a disservice. Some of my new characters are truly horrendous!

Do you have any hints and tips for other writers of fiction?

Never give up. You will get knockbacks, you will find yourself working long hours for little reward, but every writer who's ever become a success has gone through that. If others criticise your work, decide whether you can learn from it and then take time out to remind yourself of your own faith in what you do.

Also, don't get hung up on trying to find a mainstream publisher. These days, self-publishing opens up endless possibilities. The publishing industry is rapidly changing. Who knows what's next in store for us.