It's always a great pleasure to chat to Gilli Allan and to hear about what is going on in her writing life. This week the paperback edition of her novel Buried Treasure is published.

I think you will agree that it has a gorgeous cover! It suggests straight away that this novel will feature an archaeological excavation and its after-effects. Look at that golden S in Treasure - isn't it a lovely artistic touch? 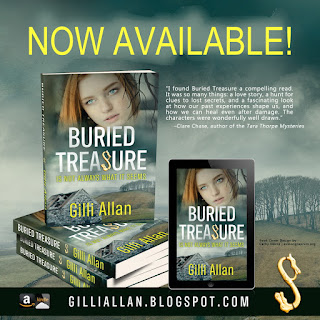 Gilli's novel isn't just about digging up the past. As she explains in her own blog:

'Buried Treasure is less about material treasure (or even archaeology) than it is about the damage that burying the past can inflict on the present.  It is easier to suppress hurt and humiliation, and erect barriers against the world. It is only by trusting again, and exposing your mistakes to the light, that you can rediscover the best of yourself.'

But how did Gilli go about researching a novel involving archaeology? She got her hands dirty by having a go herself, of course. As it turned out, her published novel features more desk archaeology than actual digging in the mud. But she still found getting some practical experience of field archaeology was very well worth while.

This is what happened on her day at a dig.

'I had just begun to write Buried Treasure. Though it had no title, barely any plot, and only the sketchiest of characters, what I did have was a theme – archaeology, and an elevator pitch: Educating Rita meets Time Team!  So, in the summer, a couple of years ago, my husband and I travelled from Gloucestershire where we live, to East Sussex. “Fun” was not the only reason we made the trip to stay with my sister, Jan and her husband.

'Through the Sussex School of Archaeology, Jan is in touch with what’s going on in her locality. I wanted to get a hands-on feel for the practicalities of field archaeology. She identified a day-long introductory course called Excavation Techniques for Beginners sited at the Plumpton Roman Villa Excavations. It sounded perfect and we both signed up for it.

'Jan, who has experience of digs, stressed that the work can be very hard. “Knackering” is the precise term used. No longer in the first flush of youth, I began to worry how well I would cope. The weather was another concern.  This is England, after all, and the prospect of trying to excavate heavy, soaked earth, hampered by wet clothes, was unappealing.  Nor was its opposite - getting scorched.  As I also assumed there’d be little prospect of actually finding anything (they’d not set loose a bunch of amateurs on an area likely to give up many, if any, treasures - would they?)  I imagined myself wet, muddy, exhausted and in pain, scrabbling waist deep in a barren trench.

When the day came it was a sunhat I needed. 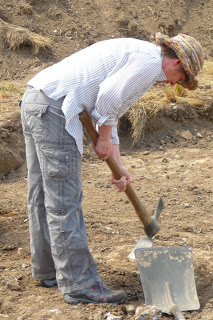 'A corner of the large site, covered in tarpaulins, had been thoroughly excavated the year before.  Over the great majority of the remaining area, only the surface turf had been removed. There were about ten of us and, after an overview of the project and a demonstration of the techniques we were to employ, we divided into pairs and a strip was allocated to each, well away from the older excavations, or the patterns on the surface of the site which marked the outline of the original structure.

'Each two-man team started a metre or so in from the perimeter worked slowly back towards the edge, keeping in line with the other teams.  Correctly used it’s amazing how delicate you can be with a mattock! The loosened earth was examined and anything that looked interesting was put in a tray, and in due course shown to the team leader. The rest was tipped into a bucket, which had to be regularly emptied on to the already impressive spoil heap built up from the scalping of the turf and from the earlier excavations.

'I was the mattock wielder; my sister was the collector and identifier, before we changed places. My expectations of finding anything, other than soil, stones, and worms were low, but, from the dislodged material of my very first mattock stroke, Jan picked out a rim section of a pot. And we weren’t the only ones to unearth objects of interest. All along the line, artefacts were being found - fragments of shell, shards of pottery, tiles and a terracotta material, which looked like brick.
'After a picnic lunch, we were given kneeling mats and archaeological trowels (like a small plasterer's trowel) and we went back to our places. Side by side, all the pairs worked backwards again, but this time gently scraping, then brushing, another layer of earth from the surface.  And the finds kept coming.

'None of our discoveries were larger than the palm of my hand, and most were far smaller. By the end of our time at the dig, we had penetrated the surface by no more than around five centimetres, so it was evident there was far more still to be found in this area of the site.

'At the end of the day, Jan and I had to walk away from our own strip leaving a tile with a ridge along one edge, as well as various bits of brick, protruding tantalisingly from the ground.'