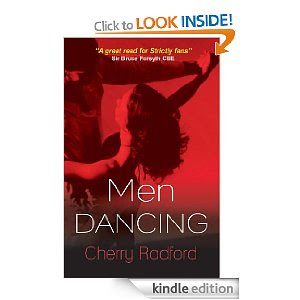 I'm going to have to give just-published Cherry Radford a mention on this blog because she's written a novel endorsed by none other than Sir Bruce Forsyth, CBE, and it's about one of my favourite subjects - dancing.

I can't dance - don't ask me - I can't dance - merci beaucoup, as Fred and Ginger sort of said, I think. But I love watching other people dance, and this novel also features one of my other passions, Maltesers.

So - with a box of Maltesers to hand and my laptop on my lap (where else) I'll be looking forward to reading this novel! 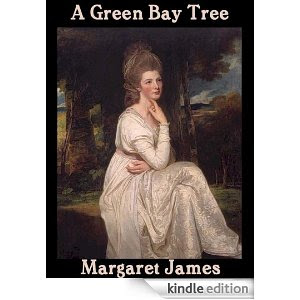 It's good to see one of my favourite historical novels has now been Kindled by Belgrave House, an American ebook publisher who does a great job of making authors' backlists available worldwide in many different formats.

A Green Bay Tree is a family saga set in the Midlands during the time of the Industrial Revolution, when it must have been hugely distressing to see the beautiful English countryside being desecrated by mining, factories, ironworks and thousands of forges, workshops and small-scale family industries. But it must have been exciting, too - for this was the time when the UK was the workshop of the world, on the brink of creating the greatest empire the world has ever known, and Britannia really did rule the waves.

This novel is the product of my fascination with this period of English history.
Posted by Margaret James at 1:20 PM 3 comments: 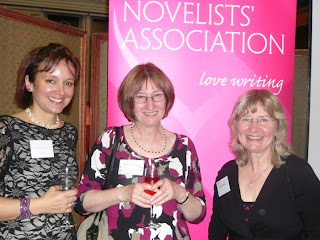 Exeter Writers sent a delegation to the RNA Winter Party this year, and here's the evidence!

Left to right - vice-chairman Sophie Duffy, member Margaret James and chairman Cathie Hartigan. As you can see, we enjoyed ourselves, and we had a good time networking and being networked. We also managed to drink some champagne. All in the line of duty, naturally.

Thanks to lovely Lizzie Lamb for taking the photograph and sharing it on Facebook.
Posted by Margaret James at 1:56 PM 5 comments:

I heard last week that one of my creative writing students has been shortlisted for the Luke Bitmead Award, which is sponsored by Legent Press. So I am feeling very smug and am hoping my student wins. I'll let the whole world know if this happens!

It's so lovely when a student does well. It makes me feel I am a good teacher.

Christmas - hmmm, have mixed feelings about Christmas because my own family is so scattered, and my dream is to have everyone under one roof one fine Christmas Day. I don't know if this will ever happen. What I do know is that it would have to be a pretty big roof!

But anyway, today I got myself organised enough to make a Christmas cake, so the whole house smells of Christmas, and that's put me in a very good mood. This year, I've got it done in time to ice the cake with real royal icing, not that fondant stuff which never sets properly. So that's put a smile on my face, and I'm planning to send slices of my cake to absent friends across the oceans this year. Or that's what I'm thinking now. But I do have two nephews I'll be seeing on Christmas Day, and they're the human equivalents of gannets...

Something else that's put me in the mood for Christmas is Trisha Ashley's lovely new novel The Magic of Christmas, out now and destined to be the Christmas number one, I'm sure. I'm not usually in the business of prophecy, but I think I'm going to be right this time. You read it here first!
Posted by Margaret James at 8:40 PM 5 comments:

My Book of the Month for November is Magnolia House by Pauline Barclay, and it's something a bit different - a family story in which the central character is an older woman, and it's a very thought-provoking read.

Here's what Amazon has to say about it:

"When Jane Leonard gave half of her house to her only son, little did she realise that within twelve months she would be forced to sell the home she had lived in for nearly five decades.

The choice for this action was not hers, but the events that led up to her handing over fifty percent of Magnolia House paled by comparison to what happened after the ink had dried on the documents that named the new owners.

As Magnolia House is put on the market for sale, love and betrayal, hopes and dreams and ultimately family loyalty will affect the lives of all of those who become involved."

"Magnolia House is not about romance. It's about love and pain and what happens when hearts are broken into tiny pieces."

If all this sounds rather gloomy, please rest assured it's not a gloomy read! It's hopeful and uplifting and ultimately about the triumph of the human spirit. All in all, it's a lovely book.
Posted by Margaret James at 9:44 AM 2 comments: