Publishing is changing - well, we all know this.

But it's changing in a way that means the reading public will now have much more choice when it comes to making decisions about what they really want to read.

So you're commercially published, but your publisher doesn't get round to putting your books out there as ebook downloads. What do you do?

You do it yourself, as Valerie Holmes is, with her huge backlist (thirty titles and counting) of novelettes originally published by D C Thomson and Ulverscroft.

Valerie's stories are fun, adventurous and feature lively, feisty heroines who get what they want. They make great short reads.

Valerie intends to publish all her novelettes as ebooks and has commissioned a designer to produce attractive artwork for them. She says:


"I thought about trying to bodge up a cover. Then I thought - better try and look professional because I have thirty titles to send out, so why not develop an idea. So I contacted a professional, pitching the idea of committing us both to an ongoing relationship for the duration of the 30. Hence the idea of Valerie Holmes: Romantic Adventures was born.

"The designer came up trumps so long as I settled for illustrations with a themed header. Sounded good to me, so I have taken the plunge. I am now doing over-writes to make all my books that bit better ( I hope).

"Moving On is first to be published as it was short-listed for an RNA award most recently. Stolen Treasure will be next so that a historical title follows."
Posted by Margaret James at 11:33 PM No comments:

Most writers spend a lot of their time alone in their studies with their imaginations, but sometimes we get out and about. I have two out-and-about events coming up and would be delighted to meet anyone who'd like to meet me.

A date for your diary!

We will be signing books and talking to customers. Do come in and have a glass of wine with us!

A second date for your diary!

Local writers Jane Lovering (winner of the RNA Romantic Novel of the Year 2012), Linda Mitchelmore and I will be talking about our novels in a discussion chaired by Cathie Hartigan of http://www.creativewritingmatters.co.uk/, and also signing copies of our books.

This and lots of other West Country literary events are on the Cyprus Well website at http://www.cypruswell.com/calendar-news.php - it's well worth a look.
Posted by Margaret James at 5:25 PM 2 comments:

The last Choc Lit Short Story Competition was such a big success that a second competition is now under way, and we've roped in hugely successful short story writer and novelist Linda Mitchelmore to help with the judging.

You may be thinking that since you don't write romantic fiction, this competition is not for you. If you do think that, you would be wrong. The competition is open to all writers, and the winning story in the first competition was a moving one about a special kind of courage. This isn't to say the winner of the new competition won't have written a romantic story, but what I can tell you now is that the winner will have written what Sue Moorcroft, Linda Mitchelmore and I consider to be the best story.

We're looking forward to reading some wonderful stories!
Posted by Margaret James at 12:42 PM No comments:

It's always exciting to see a new author making it into print. This month, I'm delighted to congratulate Linda Mitchelmore, whose debut novel To Turn Full Circle is published by award-winning independent Choc Lit. A story set in Linda's home county of Devon, this is the first novel in a trilogy featuring Emma Le Goff and her descendants. 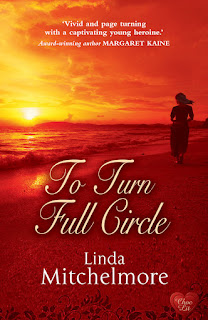 The trilogy begins in 1909, when Emma's mother and brother die in mysterious circumstances and Emma is left alone in a hostile world. Devon might be a beautiful county, but at the beginning of the twentieth century life there was hard for ordinary people. Emma finds an ally in handsome Seth Jago, her landlord's son. But fisherman Matthew Caunter is attracted to Emma, too - and this makes Seth very jealous.

Linda has written a wonderful love story which also features an intriguing mystery. It's certain to become another Choc Lit success!