Hello, Cathie - welcome to my blog on this rainy morning!

I'm delighted you've agreed to chat to me about your debut novel Secret of the Song, a time slip story set in Renaissance Naples and 21st century Devon. 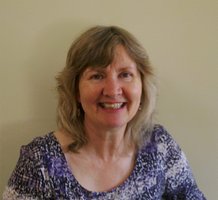 MJ: What was the original inspiration for this novel?

CH: A few years ago when I was in a small choir we were given a song to sing by Carlo Gesualdo, one of the main characters in my book. I’d never heard of him. The music was difficult and we all got very grumpy. Although the music was written back in the 16th century, it sounded very discordant, almost avant garde. The choirmaster then told us about Gesualdo’s notoriety. When I did some research into his life, I was hooked.

MJ: What particularly attracted you to writing a time slip story?

CH: It was at the same rehearsal that I first wondered whether madness could be somehow transmitted in music such that it affected the musicians who performed it. When I think of those ‘maddening’ tunes that seem to go round and round in the head for days on end, earworms they’re called, then it seems quite likely. I thought I would write a contemporary novel about a singer finding out about Gesualdo and then wondering if a piece of music could be cursed, but when I read the witness statement by young Silvia Albana, I was so taken by her plight, that I decided to interweave her story. She was the seamstress and confidant to Gesualdo’s wife, a princess who behaved so recklessly that she endangered both herself and poor Silvia. 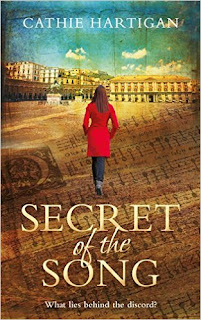 MJ: How do you work – are you a planner and are you most definitely in charge, or do you let your characters guide you into their stories and do you take your cues from them?

CH: I have a plan but it isn’t very exact, although I do know what the big questions are that I’m trying to answer. Writing a few chapters in order to really immerse myself in the world helps me too, and I get to know the characters more thoroughly. That’s usually when I pause and tighten up the plan.

MJ: As a classical musician and singer yourself, do you feel you have a mission to encourage more people to take an interest in classical music and – if so – was this one of your motives for writing this novel?

CH: I certainly felt I had a mission when I trained to be a music teacher but that was quite a long time ago. Now I think the best way to encourage anyone to do or enjoy anything is to be passionate about it. I absolutely love singing the sort of music I have written about and if I can enthuse my readers to go and listen to (or better still, sing) any Italian or English songs written during Tudor times, it would be fantastic.

MJ: Who is your favourite character in Secret of the Song?

CH: That’s very difficult because I’m so fond of several, but I think it’s got to be Mollie. She’s the precocious ten year-old daughter of Lisa, my contemporary heroine. There’s considerable negotiation that goes on between mother and daughter. There’s one particular scene I’m fond of where Mollie has a secret and Lisa is trying to find out what it is, even though she’s always told Mollie that secrets shouldn’t be revealed.

MJ: Do you have any tips for people starting to write a first novel?

CH: Ask yourself what your novel is about and keep asking until you can answer with confidence when someone asks you. Try practising on already published novels.
Think about your plot in terms of scenes. Start each one with intrigue and end with sufficient jeopardy (not necessarily life-threatening) to make your reader want to turn over.

Do you feel more at home in a town or in the countryside?

I’ve lived in both and while I’m now more at home in a city, I do miss having the breathtaking beauty of the Devon countryside on my doorstep.

If you could live anywhere in the world, where would it be?

I love Devon so it would have be here, and I’m not a great traveller, but a small pad in London and perhaps the Dordogne, and somewhere near Florence, and maybe by the Med…

Who are your favourite composers?

I keep coming back to Bach when I play the piano, but I have a very eclectic mix of music on my phone. All sorts from the Renaissance period, but I also have Mozart, Brahms, Puccini, and quite a few albums by Pat Methany, the jazz guitarist.

Do you feel any other writers particularly influence your work?

I think all my reading has influenced me, but I remember loving a book by Barbara Trapido and thinking, she can turn the emotion on a pin. She could do funny and serious equally quickly and yet it didn’t jar. Could I do that?

What’s next on the writing agenda for you?

I have notes and a few chapters for two novels. One is a historical novel in which I revisit Renaissance Italy and it features one of the Catholic plots against Elizabeth I, and the other is a contemporary story about a restoring an old property in the face of considerable opposition. I’m not sure which novel will come first in my affection yet.

Thank you, Cathie - it was good to talk.  Many congratulations on the publication of this lovely novel, and here's to great sales now and in the future!