A feast of midsummer gorgeousness

Today, my special guest is Alison May, whose delicious romantic comedy Midsummer Dreams is published this June, appropriately enough at midsummer! 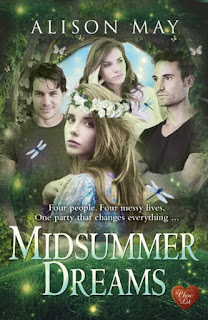 Welcome, Alison – come in, sit down, have a glass of something light and sparkly and some chocolate-coated strawberries?

These days, you’re making quite a name for yourself with your brilliant adaptations of the storylines from some of Shakespeare’s plays. What made you choose A Midsummer Night’s Dream as the inspiration for your new book?

Well obviously A Midsummer Night’s Dream was a serious and considered choice. What definitely didn’t happen was that I went to my first meeting with my publisher and panicked and said the first Shakespeare play that came to mind when she asked what I’d be working on next. That absolutely and categorically didn’t happen at all.

I think what did entice me about A Midsummer Night’s Dream was the way that it interleaves fairies and magic with the ‘real world’ characters. I write what I tend to call ‘rationalist romance’ so I knew I didn’t want it to be a paranormal novel, so the challenge was how to bring the magic in while staying in the ‘real’ world.
Tell us a little about the heroes and heroines of your story?

There are four main characters and they’re all a little bit broken at the start of the story, although I don’t think they necessarily know that themselves. Dominic and Emily have got their lives all mapped out. Alex has no plan at all, but thinks that suits him just fine. Maybe the fourth character, Helen, is the only one who realises that she’s stuck in limbo. Although I don’t think she has the smallest clue what to do to change her situation.

I like writing about characters who are trapped in some way, usually by their own flaws or failings, and all four main characters in Midsummer Dreams definitely fall into that category.

Did you have any input when it came to designing the gorgeous summery cover? What does it tell us about the novel?

The cover is all down to the genius of Berni Stevens. I think what it tells you about the novel is summed up by both the images and the tagline – Four people. Four messy lives. One night that changes everything.

I love the way the characters on the cover almost look like they’re penned in by the foliage around them. It’s beautiful but at the same time maybe a tiny bit claustrophobic? Mainly when I look at this cover though, I just jump up and down shouting ‘So pretty! So pretty!’

I hope you’ll be happy to share a little background stuff with me? Do you come from a family of writers or are you the family maverick? When did you first decide you wanted to write fiction, and what drew you to romantic fiction in particular? 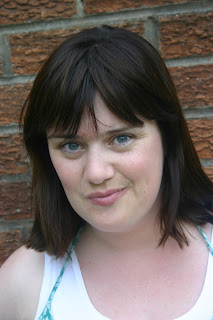 I’m not from a family of writers, but I am from a family of readers. I remember trips to the library with my mum from a very young age, and I grew up in a house full of books and bookshelves.

I’m not entirely sure what drew me to romance. I do read a lot of romantic comedy and contemporary women’s fiction. I love writers like Marian Keyes, Mhairi McFarlane, Sarra Manning, Julie Cohen and Jane Lovering. So probably it just comes down to writing what I love!

Do your heroines take after you in any way? Or are they the kind of person you would like to be?

I seem to write two different ‘types’ of heroine. The ones that are outwardly confident – like Trix in Sweet Nothing or Helen in Midsummer Dreams, and the type who wear their neuroses on their sleeves – most obviously Henrietta in Sweet Nothing, but also the heroine I’m writing at the moment, Jessica. I’m probably more the first type myself, but that doesn’t mean I don’t have any neuroses; I just do my best to save them up and put them in a book!

Planner, vague outliner or planning phobic – when it comes to working out the storyline in a novel, who are you?

It varies. I seem to be becoming more of a planner as I get older and more haggard and world weary. For Sweet Nothing and Holly’s Christmas Kiss  I started with nothing but the vague plot idea, and then I wrote into the ether and hoped for the best. Now I tend to have at least a few notes and an idea of the shape of the book before I start. It almost always changes massively as I write though.

What is your best time of day for writing?

Morning. Or very late at night.

Who are your favourite romantic hero and heroine?

Benedick and Beatrice from Much About Nothing. Closely followed by the Doctor and River Song from Doctor Who.

If you could interview any historical figure, real or imaginary, who would it be and why?

Do you have any special non-writing ambitions?

To fly away in the TARDIS. Are you sensing a theme here?

What’s next on the agenda for Alison May? I bet it’s not updating Titus Andronicus…

Yeah – I’m going to do a rom com version of Titus Andronicus. Why ever not? Seriously, I’m just getting my third Christmas Kisses book ready to send off to my publisher. That story is all about Jessica, a woman who had the perfect first kiss but followed it up with a disastrous marriage.

After that, I’m not quite sure yet. There are certainly Shakespeare comedies I’d still love to adapt, but I might do something a little bit different first. Watch this space…

Four people. Four messy lives. One party that changes everything …

Emily is obsessed with ending her father’s new relationship – but is blind to the fact that her own is far from perfect.

Dominic has spent so long making other people happy that he’s hardly noticed he’s not happy himself.

Helen has loved the same man, unrequitedly, for ten years. Now she may have to face up to the fact that he will never be hers.

Alex has always played the field. But when he finally meets a girl he wants to commit to, she is just out of his reach.

At a midsummer wedding party, the bonds that tie the four friends together begin to unravel and show them that, sometimes, the sensible choice is not always the right one.

Alison was born and raised in , but now lives in with one husband, no kids and no pets. There were goldfish once. That ended badly.

Alison has studied History and Creative Writing, and has worked as a waitress, a shop assistant, a learning adviser, an advice centre manager, and a freelance trainer, before settling on 'making up stories' as an entirely acceptable grown-up career plan.

Alison is a member of the Romantic Novelists' Association, and won the Elizabeth Goudge Trophy in 2012. She writes contemporary romantic comedies, published by Choc Lit. In addition to Midsummer Dreams, she is also the author of Sweet Nothing and the Christmas Kisses series.

You can find out more about Alison’s books at www.alison-may.co.uk/books/ or by following her on Twitter @MsAlisonMay

Posted by Margaret James at 7:23 PM