Meet Chris Penhall and learn all about her Ruby Fiction debut

I was excited to hear about writer Chris Penhall's success as both a debut and prizewinning novelist, and I have been looking forward to chatting ever since I heard that Chris had won a competition sponsored by award-winning independent publisher Choc Lit and Your Cat magazine.

Let's find out more about Chris. 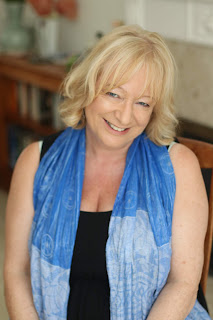 She's a freelance writer and radio producer for her local BBC Radio station, as well as being an Associate Producer for the Richard and Judy Book Club Podcast. Born in South Wales, she has also lived near London and in Portugal, which is where The House that Alice Built is set. It was whilst living in Cascais near Lisbon that she began to dabble in writing fiction, but it was many years later that she was confident enough to start writing her first novel, and many years after that she finally finished it.  She is now working on her second. A lover of books, music and cats, she is also an enthusiastic salsa dancer, a keen cook and loves to travel. She is never happier than when she is gazing at the sea. Chris has two grown-up daughters and lives in the Essex countryside.

The House that Alice Built is Chris’s first novel. What a gorgeous cover - and look, there's Aphrodite the cat, who partly inspired the story! 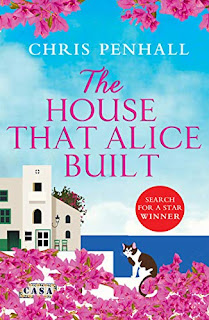 The book is about sensible Alice, who is working hard to pay for the beloved London house she and her ex bought many years previously. She’s throwing all her money and love into that whilst he is off having a mid-life crisis and travelling the world. But when he sends her a postcard telling her he wants to sell the house at the same time as she gets made redundant, she panics.

As far as she’s concerned, he has only paid enough towards it to own the downstairs toilet. But rather than stand up to him, she does something uncharacteristic. She leaves the country. But only goes as far as Portugal where her best friend Kathy is living.

But her ex isn’t going to give up that easily.

Once Alice gets to Portugal, she begins to learn how to let go and find the person she used to be. And of course, there’s a man. There’s also Aphrodite the cat, Elvis the dog, a spot of paddle boarding, and a bit of dancing on top of bars.

'I wanted to write about escape, learning to let go, and re-inventing yourself,' says Chris.
'But mostly, I wanted my story to be fun, sunny, and uplifting. It’s my love letter to Portugal.'

I'm sure all Chris's readers will agree that The House that Alice Built is a fun, inspiring and engaging read. You can get all the links to buying the e-book or audio by visiting www.chrispenhall.co.uk

Posted by Margaret James at 5:56 PM