May Book of the Month - Jane Casey 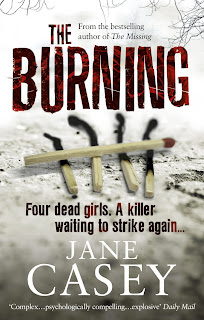 Gosh, is it May already? Where has 2011 gone, or half gone? I'm a day late with my May book of the month posting - must have had a long sleep yesterday!

Anyway - Jane Casey's The Burning is a fantastic read. A crime novel which is the first in a series featuring DC Maeve Kerrigan, this novel is about a serial killer who is targeting young women in central London, and it's a race against time to catch him before he kills yet again. Maeve Kerrigan is the youngest, most inexperienced detective on the team, patronised and sidelined by the men, and often unsure of herself.

In the course of the novel, she grows in confidence and even gains the respect of some (if not all) of the men with whom she's working. I'm looking forward to reading the next novel in the series, entitled The Reckoning, and following Maeve's progress over the coming years.
Posted by Margaret James at 5:48 PM