Presentation of the first Exeter Novel Prize - the excitement mounts!

On Saturday, the winner of the first Exeter Novel Prize will be announced at an awards ceremony in St Stephen's Church in Exeter. Cathie Hartigan, Sophie Duffy and I, who make up the CreativeWritingMatters team and who inaugurated the prize, are very excited.

A few months ago, the longlist was sent to the literary agent Broo Doherty.  Broo chose a shortlist and she will be announcing the winner on Saturday afternoon.  We three in the CWM team each have a favourite or two, but Broo isn't telling anyone anything until the day. So we're as much in the dark as everyone else.

The shortlist is as follows:

The winner will receive £500 (this first prize is kindly sponsored for Exeter Writers) and a trophy. Also, every runner-up will  receive £50. 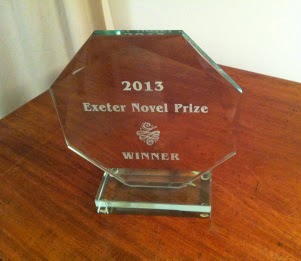 Exeter Writers will also be launching their new anthology and copies will be on display.

We hope to welcome lots of Devonians as well as people coming from all over the country to this special day.

Saturday 22 March, 2 pm, St Stephen's Church, Exeter - we hope to see you there!

The 2014 competition opens in May. So, if you're a novelist, are yet-to-be-published or are at present unagented and uncontracted, do please take a look at our website at www.creativewritingmatters.co.uk.