A fortnight ago my lovely daughter rang to say she'd got two tickets for the first live show in the new series of Strictly Come Dancing, and would I like to go? Ooh, I said, you bet I would! So off we went to London to have a snoop around the BBC Television Centre and check out Studio One, which is a great big cavern full of lights, cameras, cranes, auto-cues, monitors - and of course a cast of glamorous people who didn't look as if they really belonged in this world.  They were far too gorgeous - sigh.

It took forever to be admitted to this electronic paradise. When we arrived we nearly fainted at the sight of the queue of people who'd got there before us. We didn't realise it was necessary to arrive at crack of dawn to be sure of gaining admittance. We joined the queue. It poured with rain. The BBC people with scanners and lists moved slowly towards us. The two people in front of us got the last two confirmed tickets, and DD2 and I became Standby 1 and Standby 2. 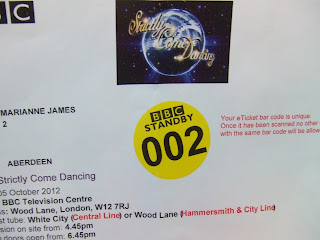 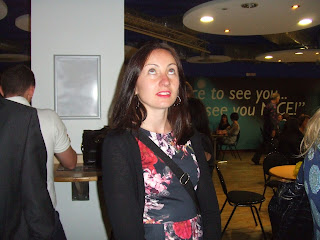