My Book of the Month for November is Christine Stovell’s delightful new romantic novel Move Over Darling.  Christine was happy to sit on my virtual sofa and answer a few questions about a story in which two very unlikely lovers find they are perfectly suited, after all. 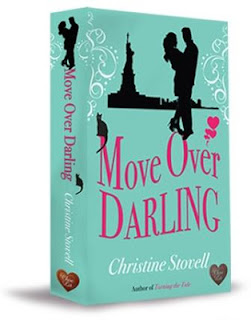 What first got you writing Move Over Darling, Christine - a place, a person, a situation?
The seeds were sown when I moved to west and discovering that the population of the county I’d moved to was roughly equal to the small borough I’d just left. However, the image that made me start writing was seeing my hero, Gethin Lewis, returning to Penmorfa, the village he’s turned his back on, to wind up his father’s estate.  I saw him cresting the hill in his hired car and catching his first glimpse of everything he’s left behind.  I could feel his mixed emotions and wondered why he was unhappy to be home. I knew that his intention was to tie up all the loose ends and put Penmorfa behind him for good. So I gave him a couple of problems…

Do you identify strongly with your heroine, Coralie?
My characters – even (some would say especially) the troublesome ones – all share aspects of me, I guess, because they’ve sprung from my imagination. Coralie’s more feminine than me, with her love of vintage clothes and what Gethin calls her ‘girlie clutter’, although she can change a tyre which is more than I can!

Choc Lit novels always feature strong, gorgeous heroes. What's your best tip for other writers trying to create a strong, gorgeous hero?
Well, of course research is very important and Choc Lit authors are very diligent about that aspect of their work. Seriously, for me it starts with a mental image; Gethin at the wheel of a car, Matthew in Turning the Tide, sitting with his back to the world.  Then I’ll start asking questions – even something simple like, ‘what’s your name’ and weighing up the response until I think I’ve got it right.  Voices are important too - I know when my hero’s arrived when I can hear him speaking.

Do you draw any of your inspiration from real life, or do you make everything up?
My fictional locations are entirely made up, although Penmorfa in Move Over Darling is inspired by the romantic rugged landscape of west where I live and Little Spitmarsh in Turning the Tide by places I’ve visited when sailing.
I keep notebooks, too, collecting snippets of news and recording anything that interests me.  Eventually these notes compost down into fertile material for creative writing.

What's the best piece of writing advice you have ever received and would like to pass on?
Well, it’s ‘apply bum to seat’ basically.  More helpfully, it was reading an article by Jane Wenham-Jones in response to a writer who always gave up on his novels at the 10,000 word mark.  It struck a chord with me because I’d always given up around that point too. Jane’s advice was not to worry about getting the first draft right but to just grit your teeth and get it written – once I did that I got published!  If only I’d got on with it sooner! 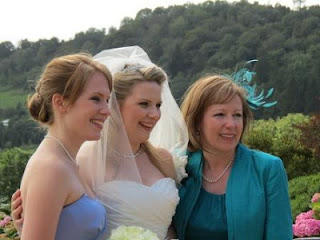 Thank you, Christine – it was great talking to you. I know you’ve been busy recently, organising your daughter’s wedding. I hope you won’t mind if I post a picture of the three of you – Daughters 1 and 2 and Mother of the Bride – gorgeous, all of you!

If you click on the book image to the right of this post, it will take you to the ’s Amazon website where you can learn more about Christine’s book.
Posted by Margaret James at 11:11 AM